A bridge for Christmas please Santa!

“A BRIDGE FOR CHRISTMAS PLEASE SANTA!”

The story of 3 kids who died because there was no bridge to cross over the Mucombeze river in central Mozambique was a truly sad story. It touched everyone in the community. We were angry and disappointed at the same time. These 3 boys loved school. They loved school so much that they decided to cross the Mucombeze river on that fateful morning when a crocodile was waiting for them to cross. Personally …. I cursed not just the crocodile or the lack of a bridge … but I cursed poverty which allowed three young boys to die. Their death was a huge blow to the community.

At the end of 2014 the bridge has been constructed and completed …. and never will any school child die because they so desperately wanted to cross the river to get to school. The best news though was that a month before Christmas the bridge was officially opened and handed over to the community. A day of rejoicing. Kids singing and a community filled with hope and joy.
Even better news was the fact that ‘santa’ didn’t hand over the bridge. Neither did he send his agents.
The bridge was made possible by generous and amazing servants of GOD from all over the globe.

People who are true transformational agents. People who heard the call ….. and answered. A special thanks to SAMM and it’s donors and people from South Africa who cared …. and made an investment in an everlasting legacy which will continue to bless many generations.

God bless you all – on the eve of Christmas. What a gift! What a God! 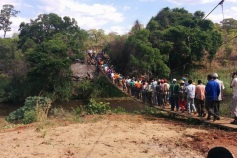 Special thanks to
Jennifer Sanderers (Nurse) and Paul Middleton (Pilot: Mercy Air) for the photo’s