Praise the Lord for answered prayers.  We are so thankful and excited that the Kodiak is only three days from being home in Africa.

After 10 hours 20 minutes of flying from Las Palmas, Carnaries they arrived safely in Accra, Ghana today!  Yeah!  They are across the ocean!
They will meet Paul Middleton today and John Herbert and Paul will continue the flight to South Africa, tomorrow.  Neil Clark, the South Africa Airways pilot, who accompanied John for the ocean crossing will fly back to South Africa.  Thank you Neil!
Here is the update from John Herbert……..It sounds like he is not sleeping, so lets pray he will get some sleep before the next flight.
Ron and I are on the way via the road to Alaska…..we appreciate your prayers for a safe trip.  If you don’t know the details, ask us and we will send you our latest newsletter.  The Lord is good and He is faithful through people like yourselves to help make impossible possible.
Thank you!
Hugs and prayers for you too!
Ron and Barb

A lot has happened since the last update from me, mostly fatigue right now. I write this as we pass by Bamako shortly after a sunrise spoiled by cloud and building weather.

I last wrote an update on the eve of our initial Atlantic leg from St Johns to Santa Maria. As it turned out, the weather did co operate and the developing system had layers of cloud and a few isolated storms, which were not significant. The weather radar was great to have in that situation as we could weave our way through the weather. this only lasted about an hour and a half or so, and otherwise we had great weather. The endless miles of ocean was a first for me and Neil was kept busy with the HF radio, which only seemed to work on the higher frequencies, but we managed to have enough contact to make air traffic control happy.

Winds have worked in our favor mostly and our fuel endurance has been better than expected and after numerous calculations as well as using the very fancy computers and TV screens on board, the numbers all check out and we have about 12.5 hrs endurance. One thing I have learned is that winds play a huge role in long range flying, making it essential to get accurate wind forecasts.

Santa Maria is a very quaint and remote island and one gets the feeling that the people have a real advantage over the huge populations of the world encumbered by the rat race. A short flight into Las Palmas was enjoyable after good rest, where we refused, hired beds and a meal at a hotel for a few hours before setting sail again around midnight. I did not manage to get any sleep, but I did manage to rest. Sleep deprivation and 13000 feet for hours on end are reason I am fatigued right now, but we have only 3 hrs left to run to Accra, where I hope to sleep after sending this email of course!

We have picked up some tail winds and the winds are exactly as forecast. 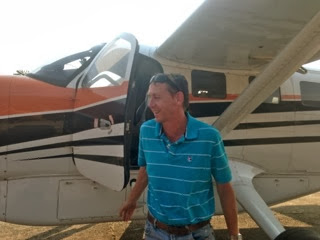 I am looking forward to getting home and 3 days of sleep!