I have travelled 14 000 km after leaving Mozambique 2 months ago.  Loosing a prop shaft on the way and trying to remove a rat that got caught in my cooling system was luckily the only problems on the journey.  Well ….. my co-travelers did find the smell of the rat a bit overwhelming as we had to wait until someone could get rid of old “Nimrod” (as we baptized him or her?)!

God has been gracious as we visited many dear friends and churches on the long journey.  They literally flung their doors wide open and treated us like royalty – day or night.  The rest of the road continued as normal – long roads, scorching heat, smuggling more than 200 Bibles …. and then there were Zimbabwe.

Now Zimbabwe has a culture of its own.  A typical border crossing will take you anything from 90 minutes to 5 hours in the heat.  Bureaucracy get a total new meaning and even after crossing this border for 16 years gives me the chills.  It is simply just that difficult. Mmmmm difficult because we smuggle Bibles all the time.  It’s the only way to get it through to Mozambique and with import duties nearly 45% per Bible ….. too expensive to follow all the channels.  BUT Zimbabwe has a few other challenges that we struggle with.  On our 650 km journey through Zimbabwe you will encounter about 15 various police stops in the Police State.  The normal greeting …. “mangwanani shamwari” won’t get you far if the police official is in a harassing mood! 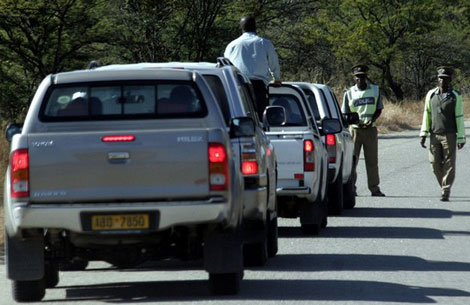 Now I always greet everyone with the biggest smile available.  Always!  But my smile was suddenly greeting at our 3d police stop for the day with a bark when the police official inspected every inch of my vehicle.  After I met all the requirement (including so many reflectors required by law that my vehicle actually became a hazard on the road) the Zim official asked me to produce my ‘fire extinguisher’ that needed to be present according to Zim Traffic Regulation 39 (a) of 1966.  And of course I did not carry a ‘fire extinguisher’!  And no one else did that passed me.  After requiring about the fact that I must be the only one ‘not carrying one’ he exploded!  A US$ fine because I-am-a -mazungu-abusing-his-country type of explanation further and I were on my way.  That was after fighting to get my license back which they wanted a bride for too.  After a ‘holy anger’ took over I got that sorted out …. at last.  (To stay sanctified in Africa is a very difficult discipline to practice sometimes!) 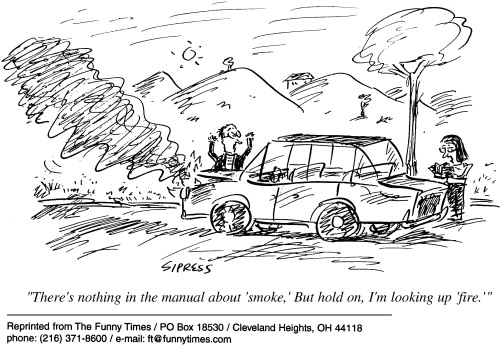 But then again I was smuggling huge amounts of aid through Zimbabwe into Mozambique.  After our 15th road block we entered Mozambique with so much aid that I knew we were going to have a unique and early Christmas.  A faint ‘halleluja’ passed my lips as we exited the last border crossing.  And we were loaded!!  From sunglasses to clothing.  From food to Bibles.  From pipe fittings to training material, stationary for 3 000 woman …. and so the list goes on! 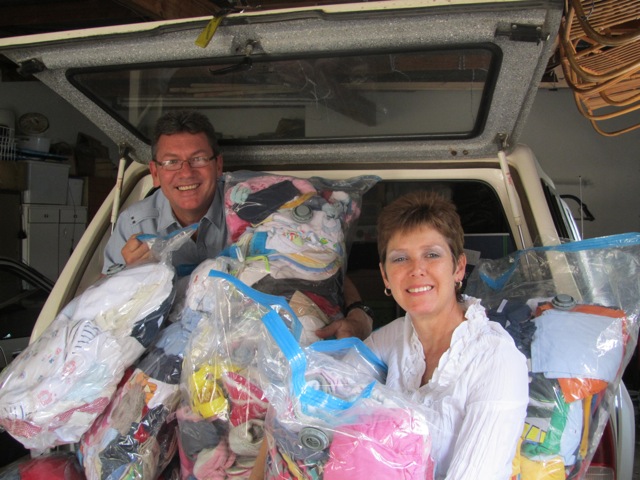 Andrea Lotz started a project in Stellenbosch Congregation to gather baby clothing for babies in Mozambique.  We got more than 15 ‘vacuum packed’ bags of clothing that we had to re-arrange and fit in the tight space.  Alta carried some with her in the vehicle ….!  The project was so successful that I think I could provide at least half of the Mozambican baby population with something to wear. 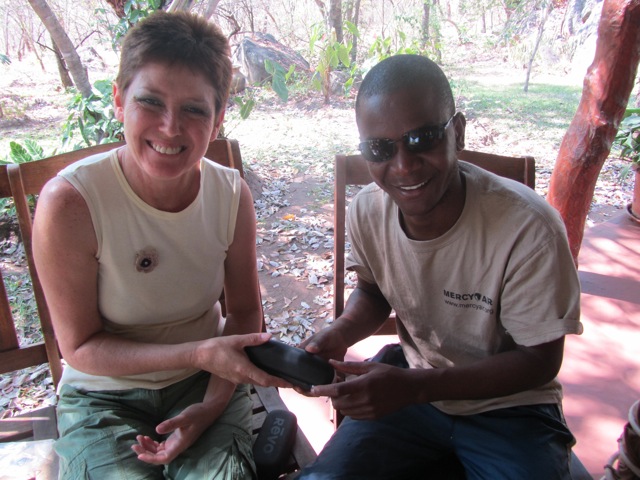 Our friend and Mozambican missionary, Joao Benjamim, was the first to receive his first brand new pair of sunglasses donated by Anina Potgieter (optometrist) and friends.  Watch this space as many people with light sensitive eyes will receive more of these sun- and reading glasses within the next few week.  Truly ….. Christmas came early.
Special thank you to all who cared so much for their fellow human beings that they all left their comfort zones to make all of these donations possible.  A HUGE Mozambican HUG to ya all!
2012-10-14T09:37:00+00:00October 14th, 2012|Travels|