No early election for BOB! 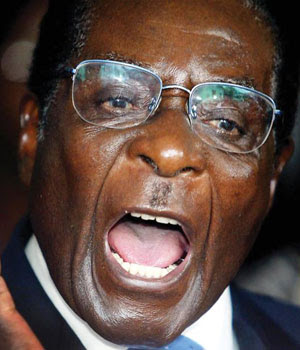 I can never forget my neighbor …. Zimbabwe.  Although our programs here run at the sound of light my mind constantly wonders back to Zimbabwe.  It’s maybe because I travel to Zimbabwe monthly … or maybe because we have so many ex-Zimbabweans in Mozambique who fled the despotic actions of his honorable, President of Zimbabwe, comrade Robert Gabriel Mugabe.

The latest news is that Mr. Mugabe wanted new polls as soon as this year to outplay the opposition party, the MDC.  Mugabe ‘thugs’ just killed another prominent MDC leader and hurt several others at a rally last weekend.  Concerns raised by the US and SADC countries fell on deaf ears (as usual) as Mugabe is still calling for 2012 elections.  SADC countries refused to veto elections for 2012 and gave Mugabe 12 months to complete reforms in his country.  Blood diamond trading helps the current revolutionaries to survive and even provide some services in the country.  There is no  doubt however that democracy in Zimbabwe is totally absent.  People are still afraid to talk and the so called police are Mugabe supporters and won’t lift a finger to help innocent people.  I still go through 10 – 15 police check points as I drive from South Africa through the beautiful country of Zimbabwe.  Please pray for this police state!