What do mosquitoes like more than clean, human skin? Stinky socks. Scientists think the musky odour of human feet can be used to attract and kill mosquitoes that carry deadly malaria. The Gates Foundation announced on Wednesday that it will help fund one such pungent project in Tanzania.

If they can be cheaply mass-produced, the traps could provide the first practical way of controlling malaria infections outside. The increased use of bed nets and indoor spraying has already helped bring down transmissions inside homes.

Dutch scientist Dr Bart Knols first discovered mosquitoes were attracted to foot odour by standing in a dark room naked and examining where he was bitten, said Dr Fredros Okumu, the head of the research project at Tanzania’s Ifakara Health Institute. But over the following 15 years, researchers struggled to put the knowledge to use.

Then Okumu discovered that the stinky smell — which he replicates using a careful blend of eight chemicals — attracts mosquitoes to a trap where they can be poisoned. The odor of human feet attracted four times as many mosquitoes as a human volunteer and the poison can kill up to 95% of mosquitoes, he said.

Although the global infection rate of malaria is falling, there are still more than 220-million new cases of malaria each year. The UN estimates almost 800 000 of those people die. Most of them are children in Africa.

Taking the fight outside
“This is the first time that we are focusing on controlling mosquitoes outside of homes,” said Okumu, a Kenyan who has been ill with the disease himself several times. “The global goal of eradication of malaria will not be possible without new technologies.”

Other scientists — including some funded by the Gates Foundation — are also researching equally novel ideas, including breeding genetically modified mosquitoes to wipe out malaria-spreading insects and creating a fungus that would kill the parasite.

Research showed that about 40% of new malaria infections in the Tanzanian city of Dar es Salaam were taking place outside the home, he said. The number of outdoor infections varied in other locations but was generally increasing as more people sprayed or slept under nets, he said. 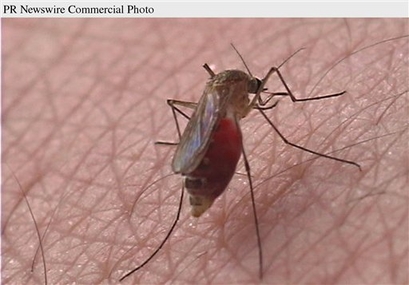 Cost implications
Okumu received an initial grant of $100 000 to help his research two years ago. Now the project has been awarded an additional $775 000 by the Bill and Melinda Gates Foundation and Grand Challenges Canada to conduct more research on how the traps should be used and whether they can be produced affordably.

Okumu said more research was needed to find the right place to put the traps. Too close would attract mosquitoes near the humans and expose them to greater risk of bites, but the devices would be ineffective if too far away.

The current traps are expensive prototypes but Okumu hopes to produce affordable traps that can be sold for between $4 and $27 each. He said they hoped to develop the devices so they would work at the ratio of 20 traps for every 1 000 people.

Edward Mwangi, who heads an alliance of 86 aid groups working to eradicate malaria in Kenya, said keeping costs low was key to developing successful technology in the developing world.

He said the current interventions such as the treated nets and malarial drugs had managed to reduce the child deaths caused by malaria in Africa by 50%.

“It’s African innovation for an African problem being developed in Africa,” said Dr Peter Singer, the head of Grand Challenges Canada, one of the project’s key funders. “It’s bold, it’s innovative and it has the potential for big impact … who would have thought that a lifesaving technology was lurking in your laundry basket?” – Sapa-AP