April fool in the bush! 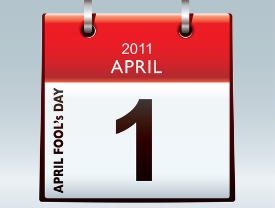 I have extreme bad memories of 1 April – April fools day!  I remember being in the army and the 1st of April fell on a Saturday morning.  It was 05:00 AM and a corporal screamed us awake in the bungalow.  Only to assure us 10 minutes later that we could go back to bed to rest!  My over-joyous mood turned to a nightmare when he stormed in 15 minutes later telling us to get our 45 kg backpack.  It was the longest 50 km route I walked in my life …. without water.  YES, 1 April will always leave a strange taste in my mouth!

Interestingly enough April fool’s day started as early as 1586 when King Charles IX from France changed New Years Day from 01 April to 01 January on the Gregorian calender.  Many were disgusted with the decision and continued to celebrate New Years on the 1st of April  – and were then branded  as “fools” by the king!

Anyway had a interesting day on the base when more than 50 workers were playing tricks on each other – sending people left and right for “meetings”.  Was very funny to see them in action – not sure who told them about 1 April …….?