I was introduced to the book, Three cups of Tea and the life story of Greg Mortenson by Barbara Rainford in England during a visit to beautiful Budleigh-East. I don’t think I ever recovered from this beautiful story. This morning I was reminded again by it from a Canadian friend, Mike Todd. I am an educator by heart and his story on building schools in Afghanistan alone with the constant threat of AlQaeda was just jaw-droppingly good. 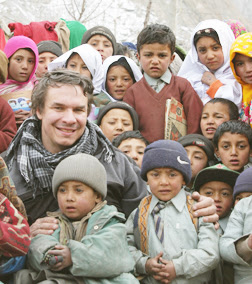 Here is an article from the New York Times published today on Greg Mortenson and his continuing story.

A visitor to Afghanistan who ventures outside the American security bubble sees pretty quickly that President Obama’s decision to triple the number of troops in Afghanistan has resulted, with some exceptions, mostly in more dead Americans and Afghans alike.
So what can we do instead? Some useful guidance comes from the man whom Afghans refer to as “Dr. Greg” — Greg Mortenson, an American who runs around in Afghan clothing building schools, as chronicled in the best-selling book “Three Cups of Tea.”
The conventional wisdom is that education and development are impossible in insecure parts of Afghanistan that the Taliban control. That view is wrong.
An organization set up by Mr. Mortenson and a number of others are showing that it is quite possible to run schools in Taliban-controlled areas. I visited some of Mr. Mortenson’s schools, literacy centers and vocational training centers, and they survive the Taliban not because of military protection (which they eschew) but because local people feel “ownership” rather than “occupation.”
“Aid can be done anywhere, including where Taliban are,” Mr. Mortenson said. “But it’s imperative the elders are consulted, and that the development staff is all local, with no foreigners.”
In volatile Kunar Province, which borders Pakistan, the Taliban recently ordered a halt to a school being built by Mr. Mortenson’s organization, the Central Asia Institute. But the villagers rushed to the school’s defense. The Taliban, which have been mounting a campaign for hearts and minds, dropped the issue, according to Wakil Karimi, who leads Mr. Mortenson’s team in Afghanistan.
In another part of Kunar Province, the Central Asia Institute is running a girls’ primary school and middle school in the heart of a Taliban-controlled area. Some of the girls are 17 or 18, which is particularly problematic for fundamentalists (who don’t always mind girls getting an education as long as they drop out by puberty). Yet this school is expanding, and now has 320 girls, Mr. Karimi said.
It survives because it is run by the imam of the mosque, and he overcomes Taliban protests by framing it as a madrassa, not a school. That seems less alien to fundamentalists and gives them a face-saving excuse to look the other way.
In Uruzgan Province, Mr. Mortenson and Mr. Karimi are beginning to pay imams to hold classes for girls in their mosques. That puts a divine stamp on girls’ education.
Each month, Mr. Mortenson’s team gets another 50 requests from villages seeking their own schools. And for the cost of a single American soldier stationed in Afghanistan for one year, it’s possible to build 20 schools.
Education is only part of the puzzle. My vote would be to scale back our military footprint: use a smaller troop presence to secure Kabul and a few other cities, step up training of the Afghan National Army, and worry less about the Taliban and more about Al Qaeda. We also should push aggressively for a peace deal between President Hamid Karzai and the Taliban, backed by Pakistan. (Would all this harm Afghan women? That’s the topic of my next column.)
Some of these initiatives are already in the works, but what is neglected is education and development, especially in Taliban areas. It’s true that this is tough, uncertain and sometimes dangerous going, with much depending on the particular Taliban commander. But, in most areas, it is possible, provided the work is done without Westerners and in close consultation with local people.
Government schools regularly get burned down, but villagers tell me that that’s because they’re seen as alien institutions built by outside construction crews. In contrast, CAREruns 300 schools in Afghanistan and not one has been burned down, the aid organization says. The Afghan Institute of Learning, run by a redoubtable Afghan woman named Sakena Yacoobi, has supported more than 300 schools and none have been burned, the institute says. Another great aid organization, BRAC, runs schools, clinics and micro finance programs — and operates in every single province in Afghanistan.
Then there’s the Global Partnership for Afghanistan, which is based in New York and helps Afghan villagers improve agricultural yields in the most unstable parts of the country. Some Taliban commanders have even sent word inviting the group into their areas.
Mr. Mortenson says that $243 million is needed to fund all higher education in Afghanistan this year. He suggests that America hold a press conference here in Kabul and put just 243 of our 100,000 soldiers (each costing $1 million per year) on planes home. Then the U.S. could take the savings and hand over a check to pay for Afghanistan’s universities.
Is this talk of schools and development naive? Military power is essential, but it’s limited in what it can achieve. There’s abundant evidence that while bombs harden hearts, schooling, over time, can transform them. That’s just being pragmatic.
If you have not yet read the book “Three Cups of Tea” …… quickly run and get hold of it and read it! 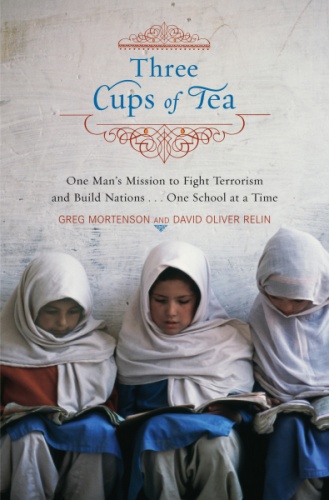