Jesus and a Yuppie!

I am pretty sure Jesus would have had a great time dealing with Yuppies (Young and Upcoming Mozambican teenagers) and their questions.  I have noticed a very interesting phenomenon while reaching out to communities in the bush via the Jesus film. 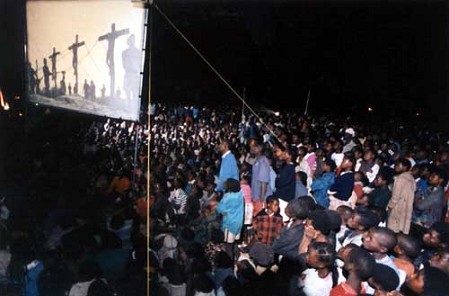 Let me say from the offset ….. as I have had several frowns using the Jesus film as a friendship tool to deal with local communities, that we use the film only on invitation after evangelical outreaches has been held in the area.  We are not a hit-and-run entity and follow-up after the film is done by local pastors in the area after training.    These gatherings are usually far out in the bush and are attended by many hundreds at a time.  We usually carry a projector, a screen using a white sheet, the generator and some speakers with us.  A good tree usually does the trick and … wola …. ready to show the Jesus film.  The narrative is based on Luke’s gospel and relates some of the major events in the life of Jesus Christ.  Although originally filmed in Israel, The Jesus Film sound track has been skilfully dubbed over in the Shona, Portuguese, Senna and whatever language we use in the area.  And virtually every word is taken directly from the Gospel of Luke.

I have noticed in the last year or so how many young people attended the Jesus film.  You will always find kids – many of them enjoying and seeing the Jesus film for the first time.  But finding young people between the ages of 16 and 30 would be scarce.  However …. after the film many young people would come for prayer …. BUT not before they had a few questions about Jesus answered.  To be authentic and culturally relevant has become increasingly important not just to me but to many young people in Mozambique. 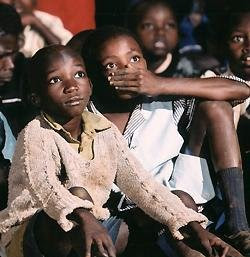 My last outreach in Gorongoza a young man was catching my eye the whole night.  It was the way he looked at the Jesus Film and how he interacted with other young people that caught my attention.  He was the leader of the group, no doubt.  At the end of the movie he waited until we were finished praying for the struggling community and to those who where interested in “finding this Jesus”.

They peppered me with many questions and quoting many Scriptures that didn’t make sense to them within their paradigm.  And the young yuppie looked at me with tears and said:  “I don’t understand much …. but someone who would die for me and not ask anything in return …. just because he LOVES …. it’s too much.  Do you think he loves a sceptic like me?”  The rest is history.

God is pretty awesome and to see young people who wants to clarify issues before they choose LIFE was pretty cool, I thought.