Paulo is a young orphan boy living in Mozambique. The mission came to his rescue by building a small house for him and a widow watching after him. When I look at kids the first thing that always strike me – is their personalities! Awesome! Paulo is lucky though …. the mission found him in time and is investing a lot in this young boy.

Paulo had a few serious health issues as 2010 started. Being sick in Mozambique has only two outcomes. You quickly recover or you die. It really is as serious as that. With no or little medical help in the bush recovery is very difficult indeed. 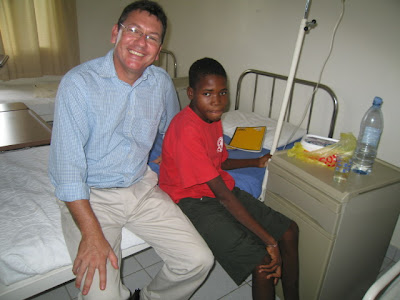 Photo: Visiting Paulo in Chimoio private hospital. He was on IV’s and when the nurse came to inject some anti-biotics he cried so much we had to calm him so he could get his medications. We took some food to brighten his day. Nothing like chicken and chips in the hospital.

Paulo had a few abscesses in his leg that wouldn’t heal. The unhygienic surroundings didn’t help his leg at all. Many of the wounds became septic and had to be drained. The mission’s Mercy Program was there to help and our senior nurse, Lynn Lagore (we call her Dr. Quinn) was ready to take Paulo to a private hospital. The state hospital didn’t work out well – let’s leave it at that. In another scenario he would just call for help ….. but no one would be listening as he was orphaned. 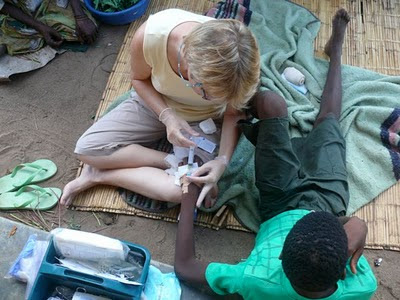 Photo: Dr. Quinn (Lynn Lagore) treating and injecting Paulo at his home in the bush. Everything is done outside in the sun ……. nowhere else! 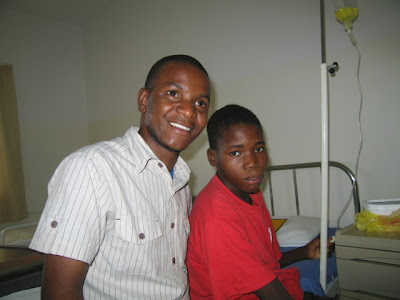 Photo: Joao Benjamin one of our sponsored University students encouraging Paulo in hospital. We had a good time of prayer with Paulo too.

Paulo is daily treated by Lynn and Keren (volunteer nurse from Canada) to make sure Paulo’s wounds are cleaned and freshly dressed. Paulo is still not doing to well but his wounds have not deteriorated. 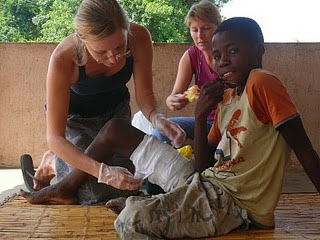 PS: Many many many thanks to Lynn, Keren and Carey for some of the photos used. Bless ya!