Dancing the night away!

They say a picture is worth a thousand words. Well I will let the pictures to the talking to summarize an awesome day with the community of Guru and surrounding areas. Guru is about 200 km from where our base is situated. The people …. and more specific the leaders of Guru has been crying for Bibles for some time now. I was able to locate some Bibles from an amazing man in South Africa Fanie Loots from Bible for Believers.

I was happy (after the normal smuggling procedures at the border) to be able to provide the leaders of Guru with more than 230 Bibles for pastors in churches. Mostly all of the pastors in churches do not own their own Bible. I left the base early in the morning packed with 230 dynamite sticks (that’s if you read the Bible and actually do it). Loaded and ready with my anxious interpreter Joao we head off to one of the most amazing experiences in my lifetime. 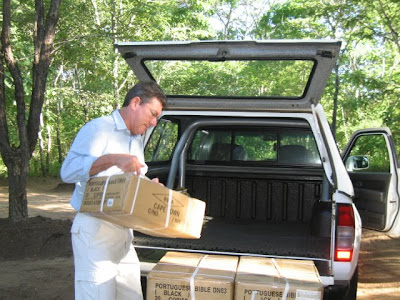 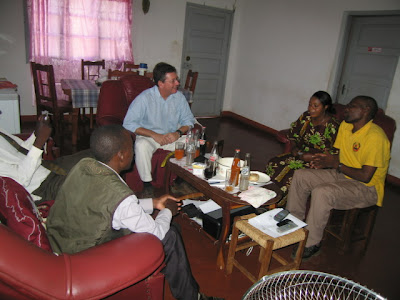 Photo: We were welcomed early in the morning in Guru by the Director of Agriculture in the area. He also played a major role in the local church in the area and was overwhelmed with his wife at our arrival as promised. Coke, Fanta and bread was a welcome breakfast. 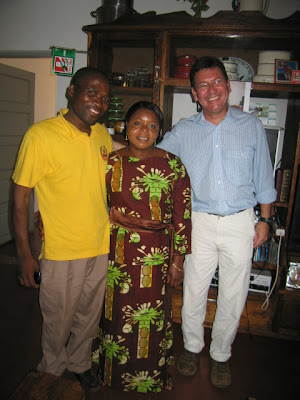 Meet the Director of Agriculture (and Administrator for the Guru town – albeit only for a week) Senhor Elias and his wife Suzanna. Their hospitality and kindness was amazing as they entertained us early in the morning. 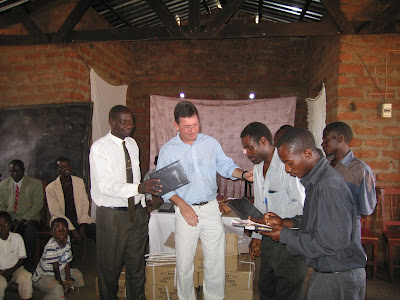 Photo: To summarize the church service is just not possible. Leaders came from everywhere with pastors travelling 150 km to receive their quota of Bibles. Bibles handed out to leaders were carefully noted by the secretary of the area. 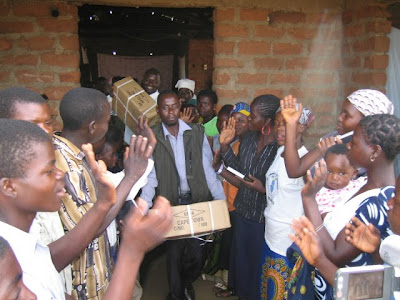 Photo: When the Bibles were ready to be transported to the different areas the church spontaneously made a line outside of the church and danced and sang until every leader appeared with his box of Bibles. 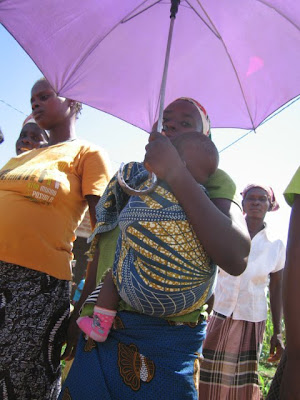 Photo: The hot sun could not keep people away. Although they did not receive a Bible (due to the shortage of Bibles) they shared in the joy and fun because someone else could receive one. Photo: The political leader of Guru helped to carry one of the boxes loaded with Bibles. 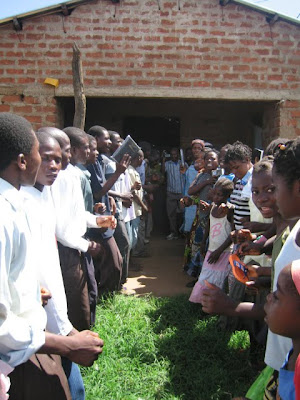 Even after the preaching and ceremony people refused to stop singing. One young man came to me after the ceremony and said: “We believe the Bibles could become more – like fish and bread – you know what I mean?” Yes, I knew what he was saying! They probably stood there for another 15 minutes before I told them that I had to leave. I was already in Guru for more than 9 hours singing, dancing, eating and praising God – it was time to leave. With cries of “don’t forget us” and “come back with more Bibles” it was time to leave the dust of Guru behind.
I arrived back home late that evening. Although satisfied …. I could still see the disappointed faces …….. saying “maybe one day ….. I will too receive my own Bible in my own language!”
Again thank yous to Bible for Believers, Bellville AFM and N&J Bible Angels for bringing life and dance back to the people of Mozambique.
PS Watch out for our unique video on the event soon!
2010-02-17T08:26:00+00:00February 17th, 2010|Bibles|