Surviving the “Highway from hell” in Zimbabwe ….. again! 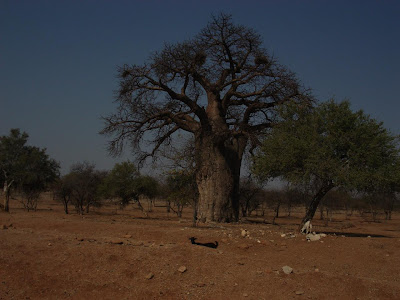 Photo: Leaving the Beitbridge border post you will run into many of these beautiful Boabab trees.
Have you ever driven on a stretch of road that is so dangerous that you think (after 50 km) “this was a mistake!” Driving on African roads could be hazardous in many ways.
Driving through Beitbridge (after being delayed for more than 2 hours) as the temperature rises to more than 34 degrees Celsius is not fun. The first few donkeys chatting lazily in the middle of the road as I came speeding along at 100km/h should have been my first warning. The goats (and there are many) are a little more streetwise. I nearly took ones tail as he darts away to safety. Sheep – different issue altogether. No wonder Jesus said the sheep needs a Shepherd. Sheep are dumb – just look into their eyes and you will understand. 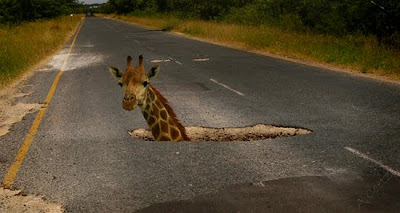 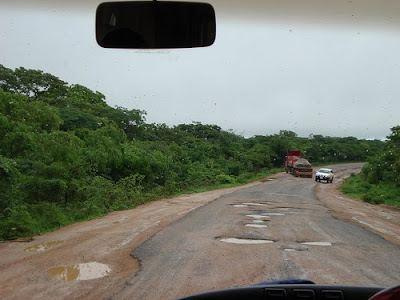 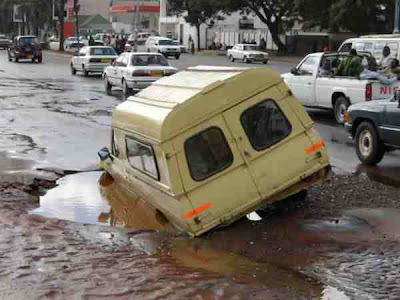 Photo: The real pothole in Zimbabwe.

Anyway it’s late on the road and all the locals keep on reminding me not to drive at night. The roads are dangerous they said. Well I thought of pushing along anyway. The vehicle wrecks with burnt-out trucks along the roadside was a reminder of people who did not listen to the locals. The potholes didn’t help either. I was swerving from the one side to the other to just hit another.
And to top it off – a toll stop on the “Highway from hell”. “US$1 the young man shouted!” I thought of saying something rude but sanity prevailed ….. only just. I payed the one dollar and wondered what the road has in store next. I didn’t have to wait long. A Zimbabwean bus passed me at 120 km/h with a door wide open. Because of a half broken axle the front wheels are on the tar and the rest is following in the dirt. A hilarious site ….. if it wasn’t for the big eyes of the passengers through the bus windows wishing they were rather travelling with me. I counted my blessings right there. 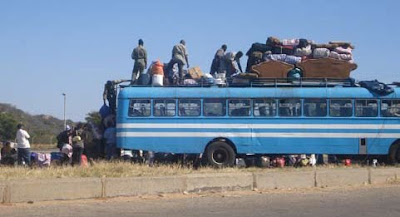 Photo: Somehow these buses seem to have a top speed like non other I have witnessed. If you dare to travel on one of these make sure you know your Saviour ahead of time!

In the distance I could see lights. And it was. The Lion and Elephant Motel was like an oasis waving me in. It was like heaven – open, friendly and I felt that I have arrived home! The Lion and Elephant motel is one of those places you just have to visit. It seems that the decor and housing stopped in the 70’s …… (they still play ABBA music) but the peace and tranquility of the place just grows on you. The owners are extremely helpful and friendly ….. you even get coffee the next morning for free (and always on time!) 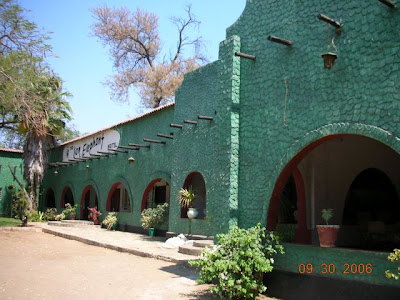 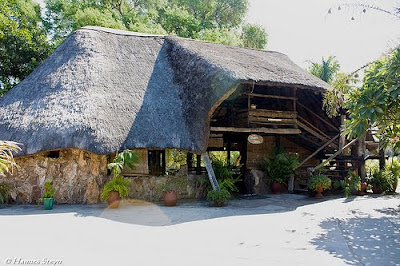 Photo: The Lion and Elephant Hotel in its glory. Photos from their postcards.

The motel was nearly destroyed by a fire in 2000 and again in 2002 because of a cyclone that hit the area. They have rebuild some of the cottages but the big trees, green grass and well kept motel is still doing business after many years. We have become friends with the Lion and Elephant hotel since then. It is a great break from the “Highway from hell”. Did I mention their food. Out of this world …… for Africa that is. Nice Eland (biggest buck in Africa) steak smoldered in a garlic crust with fresh veggies. 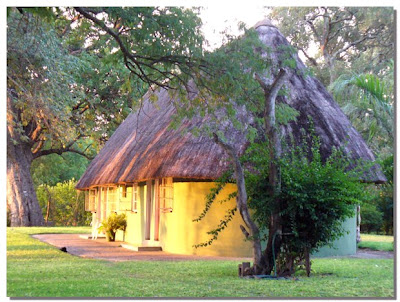 Yes …. and after a good night’s rest it was time to hit the “highway-to-you-know-where” again. We arrived safely …… thanks to your prayers and a gracious Jesus! 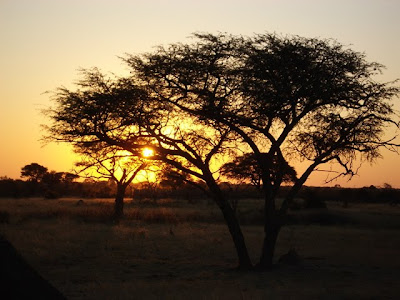 Photo: Morning has broken ………… another day …… on the road again!