School starts off with a bang ………

I was still collecting Bibles in Johannesburg just after New Year when my phone rang. It was Dwight from Mozambique calling. “Have you heard the news ……” he said, “the radio announced that schools will be starting Monday, 18 January!”. 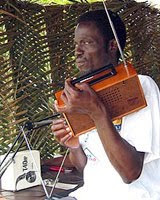 And that is how it works in Mozambique. The one day you are in Johannesburg about 1 500 km away from Mozambique and the next day you plan to rush back out of breath. Mozambique has an interesting way when it comes to sharing news. THE RADIO. Like elsewhere in Africa the radio plays a major role. We don’t always have year planners or other ways to organize our year – when the radio speaks …… we all run. Sometimes like chickens running away from the dreadful axe ….. nevertheless ….. we run. Interestingly the radio news has never changed! It sounds something like ……. drums playing on the hour and then the deep voice of a Mozambican calls out ….. “Antenna Nacional …. RM” The RM I figured out stands for Radio Mozambique. 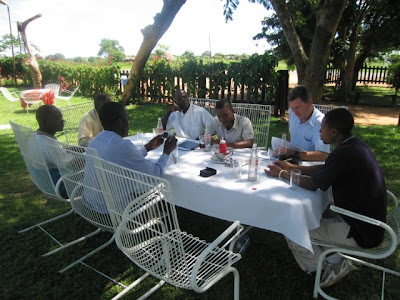 Photo: Second round of training for our teachers in a more relaxed atmosphere. The teacher unions in South Africa would be proud!!!

Well ….. to cut a long story short …. had a week to prepare teachers for the new year. Run through training, set up year rosters, hire a new teacher, buy stationary and do some more training. 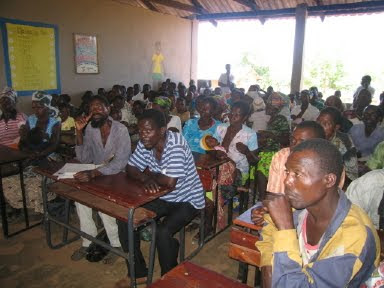 Photo: In Mozambique we don’t have to plead for parents to attend school opening. They come on short notice …… and sometimes the bush mail is faster than satellite mail!

Our schools did us proud though in 2009. We have had an overall pass rate of 85 % of which our grade 5 students who had to write an external exam fared the best of all our schools in the area with a pass rate of 90,5 %. WOW ….. that is even better than the South African results with a few hundred million to support them! 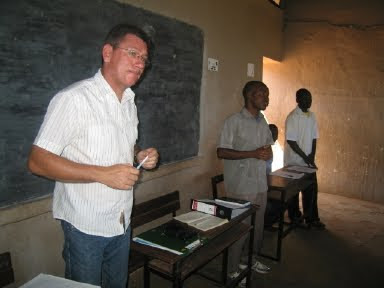 Photo: Francois – a serious moment pondering on some questions from parents in the community.

So Monday back to school (short notice and all) and even our pre-schools are ready to start the year with a bang. WE are always short on Portuguese story books. We are currently in the process of starting our own library. If you have any Portuguese books laying around – please let me know – we will pick them up from wherever in the world!