Loosing a friend in Rwanda!

I met Jane Kanyange while I was in Rwanda in 2007 and 2008. I remember her words as she handed me a gift. She said: “Francois – you are a man of Africa. I can see you will never leave our people. Keep going on!” She is a remarkable women and her legacy is even more remarkable. In her honour and to remember the great work she did in Rwanda …… I place this article written by Claude Nikondeha in her remembrance. 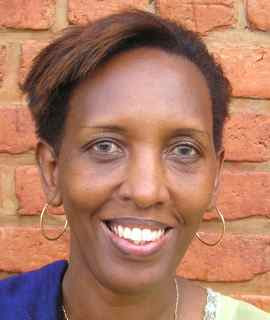 Her work…
Jane was once a middle-class banker in Kigali, a faithful church going woman. And then she started sensing God’s heard for Remera, the red light district in Kigali. She thought the church should have an outreach to this neighborhood, but her pastor told her God was not interested in those people. She was unconvinced. So she started spending time in Remera, getting to know the prostitutes, brothel owners, bartenders and bouncers.
She started a Monday night gathering at an apartment she rented in the area, and she would invite the prostitutes over. Monday nights were the nights the brothels were often closed, so it was a good time to share a meal with the women and get to know them. Soon the meal grew into a Bible study and women started changing their lives because of Christ. Eventually she had to rent a larger space to accommodate more people wanting to hear about Jesus from a woman who did not judge them, but loved them.
She started Prayer Palace. Now the former working girls lead worship. The one-time bouncers are greeters. People are learning to worship, to welcome, to serve and follow Jesus – people often overlooked by ‘respectable people.’ And as a result – brothels and bars are shutting down on almost every street in Remera. They are simply going out of business as workers and clients are coming into contact with a living demonstration of Christ’s love in their neighborhoods. The once seedy street is now respectable – and now the city leadership is developing the real estate with hotels and storefronts – due to a woman who simple followed the example of Jesus!
Jane helped the women, in particular, find other work to make a living. They have started a local business – garbage collection. Not only are the cleaning the city, they are making a wage and turning a profit! There are also other skills she is training the women in, so that they do not need to return to old ways to pay the rent. Amazing transformation!
Jane left a church that refused to follow Jesus into the red light district and ended up starting a congregation in the heart of Remera. Her congregation is a living testimony to the good news of Jesus that transforms lives, communities and even the real estate in the red light district. Her congregation changed the face of their community with a faithful witness to Christ – streets are clean, vandalism has nearly vanished, brothels are shutting down.
Her legacy…
Jane passed away on September 27th, losing her battle with cancer.
Jane was a unique woman, so deeply committed to following in the footsteps of Jesus, keeping the company He kept and turning neighborhoods upside down with His good news and goodness. She opened her heart to all those that Jesus loved and created a home and place of worship where He was honored. Jane understood that the Good News of Jesus changed hearts, lives and communities. Her work in Kigali is evidence that salvation comes to communities – and that Jesus wants to redeem entire streets and districts for His glory. We will remember her every time we walk the streets of Remera, knowing her work ushered in such transformation and newness.
Jane will be remembered as an innovator, leader, ardent follower of Jesus and dear friend. We miss her today, we will miss her always, we look forward to a sweet reunion on the other side of eternity.
Amahoro Africa friends send their deepest condolences to her beloved community, The Prayer Palace.
A special thanks to Philip Lesniweski who shared this photo of Jane taken in 2008 at The Amahoro Gathering. He captured both her inner and outer beauty.
Amahoro Jane!
2009-11-19T13:00:00+00:00November 19th, 2009|Culture|