How to be harassed in Zimbabwe! 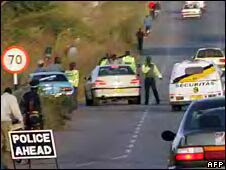 The police and the army have mounted round the clock roadblocks across the country on major roads, ostensibly to thwart acts of so-called “banditry”.
The police and military intelligence officers were targeting haulage trucks and other heavy vehicles where they check for weapons of war.

“We have been told to search for weapons and other suspicious material that can be used as weapons,” said a source. “It is not very clear when the operation will end, but we were told that we have to be thorough at these roadblocks and to arrest any suspicions characters believed to be bandits.”

With all of that said I travelled through Zim yesterday. We had more than 25 stops over 600 km (that adds up to one stop every 24 km’s). Well I don’t mind the stops but when things get out of hand it becomes a problem. I always have a strategy as I near a roadblock. Be extremely friendly ……! A typical conversation would go like this:
Me: “Hello officer hope you are doing well!”
Police: “How are you?”
Me: “Half orange half lemon.”
Police: Laughing …. “What are you carrying? Guns or roses.”
Me: “No guns …. and only one rose.” Referring to my wife offcourse.
Police: “Mmmmm …. continue your journey and don’t buy diamonds on the way.”
Well yesterday was proved not to be that easy. The young police man was rude when he tried a greeting. “I need US$20 now!” When I tried to explain that I had none and only carry local currency he went billistic. I had to get out of the car and was harassed by another 4 policemen in uniform. After confiscating my car papers they left me standing in the middle of the road for half an hour. “You are in deep trouble and will now go to court and our commisioner.” Now …. I am an extremely friendly guy but I wasn’t going to settle for that. Wrong thinking! When I said I have no fear I only fear God (why on earth would I say that??) they gave me a piece of their mind.
Anyway long story short ….. after being harassed, my local money thrown back at me and chased back to my car I could drive away …… just to stop another 25 km to get the same treatment. And when I say this ….. it is absolutely nothing in comparison with what Zimbabweans are going through daily.
Please keep on praying for Zimbabweans as they are still struggling and fighting hunger and disease to stay alive.
2009-03-11T08:39:00+00:00March 11th, 2009|General|