Thousands have been made homeless by recent flooding. The UN has warned it is running out of funds to help the 350,000 people in Mozambique in need of food aid.
The World Food Programme (WFP) told the BBC that seven of the country’s 11 provinces face an acute problem because of poor harvests.
Central and southern regions have had less than half their normal rainfall since last October.
Now heavy downpours this week have caused flooding, killed 25 people and left thousands of others homeless.
The BBC’s Jose Tembe in the capital, Maputo, says crops from central Sofala province are also under threat from locusts which have invaded the area in the last few days, worsening the impact of torrential rains. 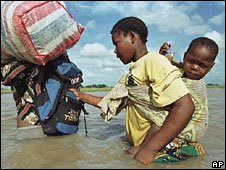