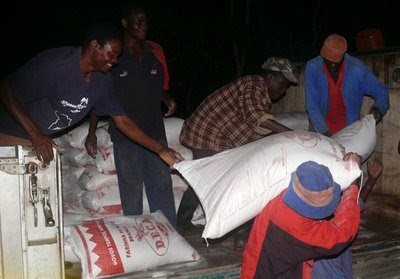 Photo: The truck with our maize meal just arrived with scarse food.
As I speak it has been reported that more than 350 000 people in central and northern Mozambique has a serious starvation problem they are facing. Central and southern regions have had less than half their normal rainfall since last October. On the mission base where I am reporting from our local people have not been spared.
Every morning we have had more than 60 people cramming in at our morning devotions trying to get some food. We have come up with a “work for food” program where people help the mission to occomplish its many tasks in exhange for maize. Rising food prices are also causing widespread hunger.
UNDERSTANDING THE CRISIS

Although it is almost impossible to pinpoint the exact cause of soaring food prices, experts have placed the blame on rising fuel costs, lower agricultural production, weather shocks, more meat consumption, and shifts to bio-fuel crops. High prices threaten to increase malnutrition, already an underlying cause of death for over 3.5 million children a year.

What we do know:

* Wheat prices are up 120%
* Rice prices have risen 75%
* Poor families spend up to 80% of their budget on food
* According to the World Bank, an estimated 100 million people have fallen into poverty in the last 2 years
* Prices are expected to stay high through 2015

We have had to purchase very expensive “farinha” – maize meal – to feed the multitude of people. To make things worse we have had many Zimbabweans who are still flocking the borders, come for help. The situation is so bad that some people that eventually get to us just collapse because of hunger. On several occasions we have had to cook food for those who were to weak to work for maize meal. 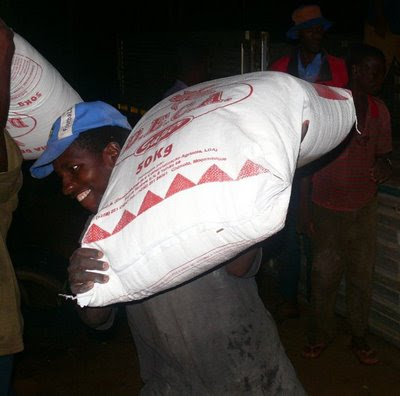 Thanks to gracious donations from Canada and South Africa (Bellville Congregation) in Cape Town we were able to buy in food and even distribute food to the far northern parts of Mozambique to our hungry pastors there.
A special word of thanks to Past. Henri Weideman and the Mission Agency of Bellville Congregation (Director: Chris Swanepoel) for their intervention. 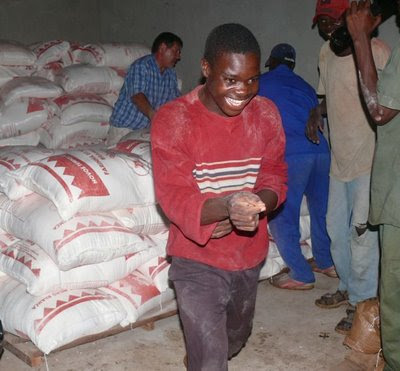