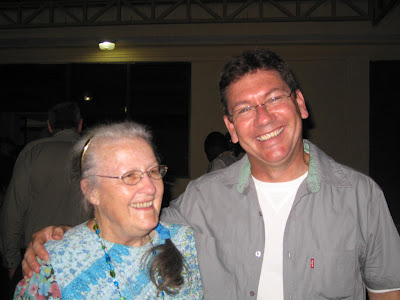 I met this wonderful lady (and she will be very angry if I compliment her too much) Annemie Bosch (you may know her husband as the well known Theologian, Prof Dawid Bosch) in Rwanda of all places. She was one of the speaker at an Amahoro gathering of African leaders conversing on “Justice and Reconciliation in Africa”. She taught me much about suffering and standing up for human rights and “being there” for those who cannot speak for themselves.

She send me the following cartoon as a memoriam. Hope you can read this. If not follow the link at http://www.thescreamonline.com/images7-1/nonsequitur.jpg

It is now more than 60 years after the Second World War in Europe ended. This blog posting is being sent as a memorial chain, in memory of the 6 million Jews, 20 million Russians, 10 million Christians and 1,900 Catholic priests who were murdered, massacred, raped, burned, starved and humiliated with the German and Russian Peoples looking the other way!
Now, more than ever, with Iraq , Iran , and others, claiming the Holocaust to be ‘a myth,’ it’s imperative to make sure the world never forgets, because there are others who would like to do it again.
Blessings!
2008-12-04T18:44:00+00:00December 4th, 2008|General|