I am sometimes reluctant to place an article like this – my last true experience in Rwanda. But if we are to have true justice and reconciliation we have to face the truth – however harsh it may be. I love the people of Rwanda. May this help us all to be aware and active in our communities and governments so this will never happen again – ANYWHERE – EVER!
Please beware that there are some graphic photos in this article.
“It’s time to cut down the tall 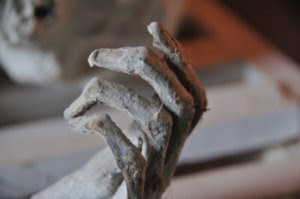 trees…” and with these words on 6 April 1994, a genocide of brutal ferocity and speed was inflicted upon the people of Rwanda. The tall trees comment was the code word for a carefully calculated campaign that saw one million people butchered by the crudest of weapons – mostly the machete – within 100 days. With the exception of the only two agencies that remained in the country throughout the genocide – The International Red Cross and Medecins Sans Frontieres – the world deserted Rwanda in its darkest hour.
Throughout rural Rwanda you will espy men dressed in dark pink overalls working on farms and other projects through the countryside. These people are considered category three prisoners (category one being planners and organisers, category two being those who oversaw the massacres) and they committed acts of murder during the genocide. However, there are several Westerns leaders (particularly the Belgium and French) and the highest levels of the UN that knew exactly what was occurring. Their complicity in failing to intervene means that some former Presidents and high-ranking UN 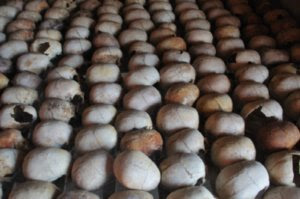 officials should be wearing the pink uniform and working in the fields of Rwanda.
Lines of skulls – Murambi Genocide Memorial, Rwanda
It was as if these leaders had personally handed machetes for the murderers to do their worst.
One of the most potent reminders for visitors are the numerous genocide monuments that scatter the country. One cannot travel far without seeing a memorial that recalls those terrible days. The most visited is the Kigali Memorial Centre, which is a sobering display on the planning, execution and resolution of the genocide. This was an event meticulously planned, and despite the warnings emanating from the country from informants who alerted the world community before the event, nothing was done to prevent these horrors. A visit here fills you with sadness, anger and a degree of guilt.
However, the more powerful memorials are those of the sites themselves. Ntarama was the location of a church where 5000 people huddled to escape the surrounding violence. Despite the brave efforts of the menfolk of the region, the padlocked doors were eventually breached on 10 April 1994, and almost every woman, child and elderly person was murdered amongst the low wooden and concrete pews. Nowadays, the tattered clothes of the deceased hang in clumps around the walls and the stench of decay is sickening. Skulls and 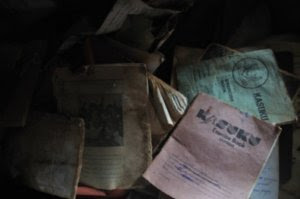 Schoolbooks within the Ntarama Genocide Memorial, Rwanda
other bones lay in rows at the back of the church, whilst the front contains the belongings of the victims including their shoes and schoolbooks. The scale of the genocide is almost incomprehensible, for though one can visit this church where 5000 were killed, one would need to call upon another 200 sites like this to fully understand what transpired.
But worst was yet to come – for the most awful of sights greeted me at the genocide memorial in Murambi, which was once a technical college near to the town of Gikongoro in the south of the country. Here, some of the most depraved atrocities of the genocide were perpetrated. After seeking shelter at the college from the massacres by remaining in the close company of stationed French soldiers, these armed forces callously departed on 17 April 1994, and by sunset on 21 April, 50,000 people had been brutally slaughtered by machete – most of them within a period of several hours when truckloads of men armed with weapons arrived in the predawn darkness.
As a tribute, some 800 of the murdered victims were exhumed and their bodies coated in lime to preserve them for the world 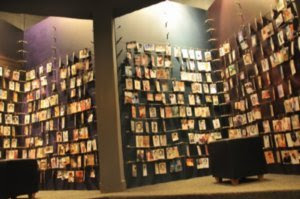 to see what occured.
Photos of genocide victims – Kigali Memorial Centre, Rwanda
These white withered bodies, laid in rows upon rows on pale slated wooden platforms are frozen at the time of their final moment. One could see people who had raised their hands to their face at the time of death to vainly protect themselves, whilst others wore contorted expressions of horror and pain. There are the corpses of adults still clutching their frail children – both bodies huddled together in a shared anguish. The manner of their deaths is also evident – as one could clearly see crushed bones caused by machetes across throats, chests and abdomens. Some had initially suffered broken ankles so that they could not escape their ultimate fate. The most upsetting corpse was that of a young child, probably about eight-ten years of age, whose small abdomen was totally crushed by the full power of a machete.
This memorial was extremely distressing, thus requiring me to leave the rooms several times to clear my head and vision, for it was not only the sight of these corpses, but also the overpowering stench of lime that evoked such emotions. Another group of foreigners on a healing pilgrimage were visiting at the same time, and one could see some of them slumped on the grass and openly weeping or standing numbly in disbelief. 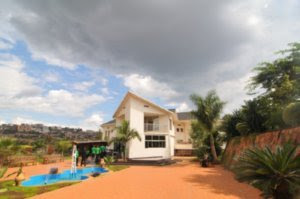 Entrance to the Kigali Memorial Centre, Rwanda
Whilst in one of these rooms, another visitor sagely commented in a wavering voice; “How can you kill so many helpless women and children and still call yourself human?” Though I clinically detached myself from the surrounds and took photos of these rooms and remains, upon reviewing the pictures later, the full shock of Murambi struck me, and many of these images are just too graphic to display on this blog.
In order to conclude the journey to Rwanda on a more positive tone, I visited the Hotel des Milles Collines, or what is more commonly known as Hotel Rwanda. This is a place, as Lonely Planet so eloquently described, “where horror and hope collided”. I wandered through the foyer and enjoyed a meal at the famous pool, whose water was used for drinking as supplies ran low within the hotel. Interestingly, there is not one plaque, notice or any other reminder of the noble and brave acts that occurred here in 1994 – acts that saved the lives of over one thousand people. 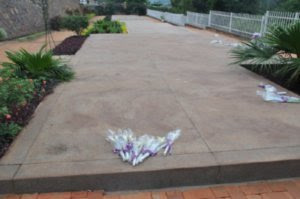 One of many – Kigali Memorial Centre, Rwanda
250,000 people are buried within the Centre’s grounds..
The final chapter of this story is recounted from Arusha in Tanzania, where I attended a day’s hearing of the International Criminal Tribunal for Rwanda. Here I witnessed the trial of four former Rwandan government Ministers who were allegedly key organisers of the genocide. After the usual security clearances, one could normally choose from three concurrent trials, though one was being conducted in closed session. After entering a long enclosed viewing room, you could wear headphones that would translate the current language being spoken into either English, French or Kinyarwanda by just switching radio channels. Listening to the legal argument and the presentation of evidence was such a sterile and detached environment when compared to the visceral memorials in Rwanda.
This Tribunal is a large part of the healing process, and certainly Rwanda has made significant progress towards reconciliation and discarded many of its troubles. There are now numerous international groups working throughout Rwanda facilitating the rebuilding of trust throughout the land and the changes in the intervening years has been remarkable. However, time does not heal all wounds, and one can still sense a terrible sadness underlying some sections of the community. 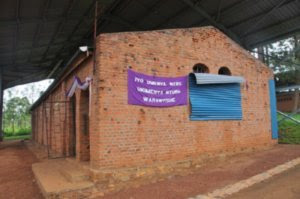 A church that is now the Ntarama Genocide Memorial, Rwanda
Though many words will be stated in courtrooms, and many hands of assistance will be offered from caring foreigners, there will still be many tears shed for generations to come.
Please pray for Rwanda and Burundi. There are wonderul Godly, good and friendly people in these countries who need our constant prayers.
2008-06-23T09:26:00+00:00June 23rd, 2008|Culture|