Relationships between Mozambique and SA hurt!

Xenophobia in South Africa hurt the relationship between Mozambicans and South Africans in more than one way. On my return to Mozambique I had to answer many questions to local communities so they could understand the situation. 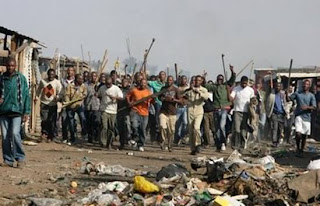 The South African High Commissioner to Mozambique, Thandi Lujabe-Rankoe, on 4 June officially apologised for the anti-foreigner pogroms in South Africa which have left 62 people, about half of them Mozambicans, dead, and have driven tens of thousands from their homes.
As she delivered a donation to the government’s relief agency, the National Disasters Management Institute (INGC), intended for the Mozambican victims of the mob violence, Lujabe-Rankoe said “there is so much sorrow for what has happened. We offer our sincere apologies”.
She recognised that Mozambicans have lived and worked in South Africa since before she was born, and those who were defending the interests of a tiny handful of people would not be able to change that situation. “We won wars in favour of the unity of our peoples, and today we have opened the borders so that the peoples of the two countries can circulate freely”, she said. “Our enemies are not happy about this. They want to separate us”.
Lujabe-Rankoe said she was confident that the situation in her country will return to normal, thus allowing the Mozambicans who have fled across the border to return to South Africa.
According to INGC national director, Joao Ribeiro, to date about 37,000 Mozambicans have fled.
The government set up a transit centre on the outskirts of Maputo that can hold 2,000 people, but the most that stayed there at any one time was 400.
2008-06-15T08:00:00+00:00June 15th, 2008|General|