Become an agent of Reconciliation TODAY!

I am only a Transformational Engineer. Imagine if we all stand together what we can achieve on the social injustice front. I read a great article from Zach Roberts – read article here(http://www.dogwoodgreensboro.org/) on this topic. We can change injustice – if we really want to. I am no politician – just a man who loves people and want to see others treated with dignity and respect. Like ZIMBABWE – we are on the brink of a war. I stay 124 km from the Zimbabwe border in Mozambique and believe me if I say ….. we need your voice. 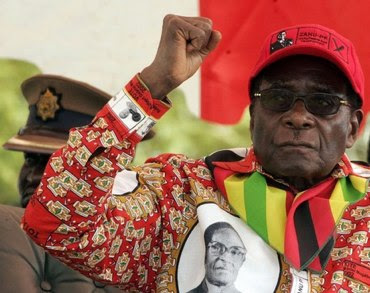 The man in your picture, “Comrade Robert Gabriel Mugabe” with his youth militia did the following in the last few weeks in Zimbabwe with the whole world watching:

On Friday, 27th June, Zimbabwe will hold a cruel sham of a vote for President. The opposition Movement for Democratic Change has just withdrawn from the run-off — not in a concession of victory, but rather in recognition that Mugabe’s campaign of violence and terror has erased any hope for a democratic election. Africa can’t let this go on — it’s time for us to act.

The United Nations Security Council unanimously held on Monday that free and fair elections are now impossible in Zimbabwe. The UN Secretary-General spoke out. But it is African leaders like Thabo Mbeki who hold the key. Even Mugabe cannot cling to power without their cooperation.

Today, we’re launching an emergency campaign, petitioning these leaders to call an immediate summit, isolate Mugabe, and broker a legitimate government for Zimbabwe.

We aim to publish our call in big newspaper advertisements including in South Africa, Tanzania, Angola and Mozambique this week — click here to see the ads and endorse their message, then spread the word:http://www.avaaz.org/en/save_zimbabwe/8.php?cl=101337550

Robert Mugabe saved Zimbabwe from colonialism. Now it’s time for African leaders to save Zimbabwe from him. Zimbabwe’s neighbours supply its electricity and goods, and control the borders. Many Southern African leaders are already calling for the postponement of the election — but there’s a real danger that they will end up accepting this charade. And if Mugabe succeeds in his de facto coup, Zimbabwe’s implosion will accelerate, and chaos could spread throughout the region.Our campaign will publicly name those African leaders who hold Mugabe’s last remaining lifeline. If they step up strongly now, they can convince enough of Mugabe’s officials that change is coming one way or another — and set the stage for Morgan Tsvangirai to lead a unity government to pull Zimbabwe back together.

Help us raise 250,000 voices this week, including a great roar from every country in Africa, to be delivered in an immediate multi-country ad campaign. Click to see the ads, sign, and then forward this message to friends:

With hope and determination, 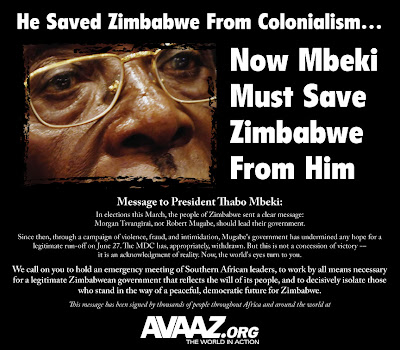