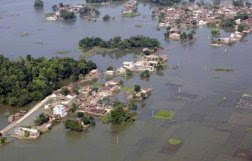 Due to heavy rains in southern Africa, the Zambezi River is overflowing and approximately 60,000 people in Mozambique are affected by floods.
Several communities along the Zambezi valley are at risk and ActionAid is working hard to evacuate people and give them necessary support and supplies.
“We are doing the best we can, but we need more resources,” says Fernando Ketulo, ActionAid’s emergencies and conflict advisor in Mozambique.
The water level of the Zambezi River is five meters higher than normal, threatening previous safe areas on higher ground in the region. 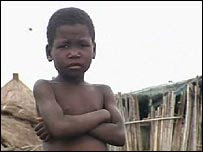 Floodwaters have destroyed homes and infrastructure
PICTURE RIGHT
Thousands of people in the region have been displaced
In February 2007, thousands of people were relocated due to the floods and they are now being threatened again by the new and much stronger floods that started at the end of last year.
ActionAid is working both with local community organisations and governmental institutions to support the people in need.
ActionAid is evacuating people with boats as well as providing tents, water, medicine, sanitation and plastic sheets for protection against the rain.
“We are also trying to pay special attention to women and children in this difficult situation,” says Ketulo.
The water levels are expected to rise even more over the next couple of days, posing danger to over 200 000 people.
The government has also declared they might have to open the gates of the over-filled Cabora Bassa Dam, further upstream.
“We are deeply concerned about the impact of releasing more water onto the lower grounds along the Zambezi Valley,” says Alberto Silva, ActionAid country director in Mozambique.
2008-01-13T07:10:00+00:00January 13th, 2008|General|