Latest update on flooding in Mozambique 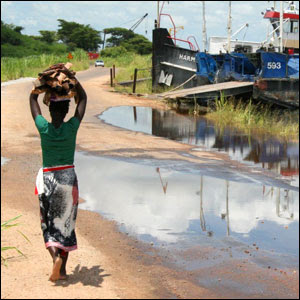 Heavy rains have caused widespread flooding in central and southern Mozambique, forcing thousands to flee their homes. The government’s relief agency, the National Disasters Management Institute (INGC), has used the armed forces to ensure that evacuation from dangerous areas is complete. According to INGC deputy director, Joao Ribeiro, “the greatest problem we face concerns people who still do not recognize the danger they are in, and so keep going back to areas of risk”.

According to the Minister of State Administration, Lucas Chomera, the government is ready to respond to the flood emergency: 800 million meticais (about $33.6 million) is available for flood relief – 80 million from the state budget, and the rest from foreign donors.

In the Zambezi valley over 62,000 people had been evacuated by 13 January. The current flooding in the Zambezi valley is already worse than the floods of February 2007, and the authorities have even been forced to evacuate areas where the victims of those earlier floods were resettled. On 11 January the National Civil Protection Unit (UNAPROC) rescued about 18,000 people in the Jardim and Cachaco resettlement areas in Mutarara district. These areas should have been safe, but they are now threatened by the continued rise in the Zambezi.
In the southern province of Inhambane, a second flood surge that swept down the Save river has inundated the town of Nova Mambone for the second time. The Save burst its banks on 12 January as the level of the river rose rapidly to 7.5 metres, two metres above the flood alert level of 5.5 metres.
In its latest bulletin, the National Water Board (DNA) warns that the situation could worsen in both the Save and Zambezi basins.
At least four people have died so far in the floods on the Pungue and Buzi rivers in the central province of Sofala. A preliminary estimate drawn up by the INGC is that, since the crisis began in late December, 53,730 people have been displaced by these floods in the districts of Dondo, Nhamatanda and Buzi.
The flood on the Buzi river is paralysing economic life in much of Buzi district. The ferry across the river, linking the areas of Bandua and Guara-Guara, cannot operate because the ramps are under water. This has made it impossible for the main employer in the district, the Buzi company, to move its main product, alcohol. Likewise the raw material for alcohol production, molasses from the Mafambisse sugar company, can no longer reach Buzi.
The district capital, Buzi town, can currently be reached overland via Tica, on the Beira-Zimbabwe road. But this route could be cut at any time, since the river is rising again following heavy rains in both Mozambique and Zimbabwe.
The Pungue, measured at the Mafambisse sugar plantation, stood at 7.47 metres on 10 January, well above flood alert level of six metres, and the DNA warned that it could rise higher.
There is also a new threat on one of the main southern rivers, the Limpopo, During 12 and 13 January the Limpopo rose by two metres at Combumune, so that it had surpassed the flood alert level.
However the DNA predicts that the level of the Limpopo will stabilize, which would mean there is little threat to the two major population centres further downstream, Chokwe and Xai-Xai.
As the population in the accommodation centres rises, so the INGC and its partners (such as the World Food Programme, and NGOs such as Oxfam and save the Children), are working to ensure that food, clean water and decent sanitation are available for people displaced by the floods, Latrines are being dug and chlorine distributed to purify water.
2008-01-28T07:06:00+00:00January 28th, 2008|Uncategorized|