I am an OUT-OF-CONTROL DISCIPLE!

I found the following article by Leonard Sweet from his Soul Cafe – this summerizes my heart and I hope yours too: 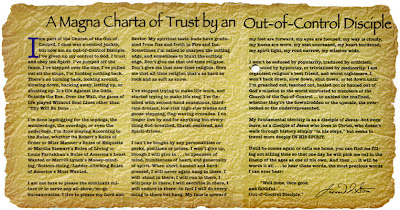 I am part of the Church of the Out-of-Control. I once was a control junkie, but now am an Out-of-Control Disciple. I’ve given up my control to God. I trust and obey the Spirit. I’ve jumped off the fence, I’ve stepped over the line, I’ve pulled out all the stops, I’m holding nothing back. There’s no turning back, looking around, slowing down, backing away, letting up, or shutting up. It’s life Against the Odds, Outside the Box, Over the Wall, the game of life played Without Goal Lines other than “Thy Will Be Done…”

I’ve stopped trying to make life work, and started trying to make life sing. I’m finished with second-hand sensations, third-rate dreams, low-risk high-rise trades and goose-stepping, flag-waving crusades. I no longer live by and for anything but everything God-breathed, Christ-centered, and Spirit-driven.

I can’t be bought by any personalities or perks, positions or prizes. I won’t give up, though I will give in… to openness of mind, humbleness of heart, and generosity of spirit. When short-handed and hard-pressed, I will never again hang in there. I will stand in there, I will run in there, I will pray in there, I will sacrifice in there, I will endure in there– in fact I will do everything in there but hang. My face is upward, my feet are forward, my eyes are focused, my way is cloudy, my knees are worn, my seat uncreased, my heart burdened, my spirit light, my road narrow, my mission wide.

I won’t be seduced by popularity, traduced by criticism, by hypocrisy, or trivialized by mediocrity. I am organized religion’s best friend, and worst nightmare. I won’t back down, slow down, shut down, or let down until I’m preached out, teached out, healed out or hauled out of God’s mission in the world entrusted to members of the Church of the Out-of-Control… to unbind the confined, whether they’re the downtrodden or the upscale, the overlooked or the underrepresented.

Until he comes again or calls me home, you can find me filling not killing time so that one day he will pick me out in the lineup of the ages as one of his own. And then… it will be worth it all… to hear these words, the most precious words I can ever hear: