Chaos at the mission base! 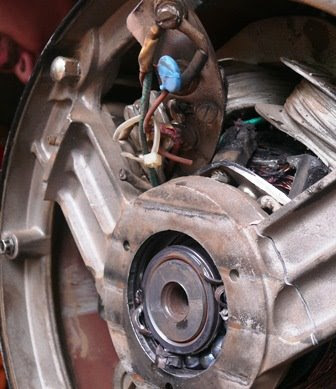 IT’S THE SMALL THINGS
…that dictate the success (or lack thereof) of larger things. For example, this past week a rather small ball bearing in our (Lister) generator-that-we-depend-on-for-everything apparently was having ‘trouble’. It was a new bearing, so it shouldn’t have. It should have been fine. It was making a new noise when it ran so we did the routine checks plus a few extras. We couldn’t see where the problem was so we were faced with having to find a mechanic, somewhere, somehow, who could give us some kind of advice. That’s not so easy way out here. The closest Lister agent is a 2 day drive away.
While we were contemplating what to do, and in very short order, the troubled bearing bade a final and destructive farewell . We knew there was trouble when the lights went off at 7 pm instead of 9 pm. We grabbed our flashlights and headed up the path toward the generator shed. We met the guard half way there. “There’s a big problem! The generator started squealing loudly, then shut itself off…I wasn’t even there…I didn’t even shut it off…It just made a loud noise and…”he managed between breaths. He’s rather excitable and when he has adrenaline surges he talks very fast. He was talking very fast then! We arrived at the shed to find columns of smoke rising from the machine and the ‘excessive speed’ warning light lit. Hmmm. This can’t be good!(see the metal pieces at the bottom of the ring? Yeah, that’s NOT good.) 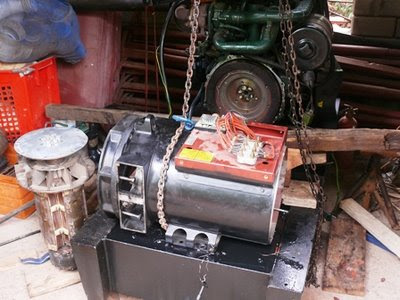 The following day we spent half the day pulling the alternator off of the diesel engine. This is no small task. The thing likely weighs a couple hundred pounds since it essentially consists of a thick metal casing and bundles upon bundles of tightly wound wire inside. Think: lead. With the help of a block and tackle, 2 tire irons, assorted tools, some serious pushing, pulling and grunting AND, let me not forget, my handy ‘this-is-serious-business-leather gloves, we got it apart! One small bearing having ‘trouble’ led to many small copper wires being torched, which brought a large powerful unit to a screeching halt. Now that it’s apart, we’re faced with the same old challenge as always…getting it somewhere to someone who can do something with it! And our trusty old back-up generator isn’t performing at the moment either. *sigh* For now, our nights are just a little darker.