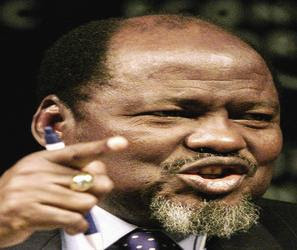 Maputo – Former Mozambican president, Joaquim Chissano has attributed the good governance award he won on Monday to the people of his country for their contribution towards peace in that former Portuguese colony.

Chissano said: “It is an honour to me and it is also an honour to the people of Mozambique for their contribution to peace and good governance.”
The award illustrated that the world appreciated efforts implemented in bringing peace to Mozambique, he said. On Monday, the Mozambican government said the award showed that the world appreciated Chissano’s efforts as a peace broker.
After it was announced in London that Chissano had won the award, Luis Covane, government spokesperson said that the prize was a way of showing appreciation of Chissano’s contribution to peace – not only in Mozambique, but on the African continent and throughout the world.
Chissano awarded $5m
Covane said: “This is proof that Chissano did not only bring peace to Mozambique, but to Africa and the whole world.”
Chissano was awarded $5m Mo Ibrahim Good Governance award on Monday at a ceremony attended by former United Nations secretary general, Kofi Annan.
The prize money would be distributed in batches of $500 000 for a period of ten years.
Chissano’s name was earlier punted in the UK media as one of the favourites, a status he shared with former Tanzanian president, Ben Mkapa, Burundi’s former president Domitien Ndayizeye and Namibian former president Sam Nujoma.
Chissano who ruled Mozambique between 1986 and 2005 was accredited for having steered the poor southern African country from a muddled phase of prolonged wars into one of democracy.
Chissano voluntary stepps down
He brokered a successful peace deal with rebels who had waged a 16-year-old civil war, which resulted in the destruction of the country’s infrastructure.
Chissano voluntary stepped down from power and his skills as a peace broker had since been tested in hotspots like Burundi and recently in Zimbabwe.
The former president was the first winner of the award, which was launched by the Mo Ibrahim Foundation – an organisation created by the Sudanese mobile phone millionaire, Mo Ibrahim.
The full list of the former presidents who were short listed for the award included Mathieu Kerekou (Benin), Azali Assoumani (Comoros), Domitien Ndayizeye (Burundi), Henrique Rosa (Guinea Bissau), Maaouya Ould Sid’Ahmed Taya (Mauritania), Sam Nujoma (Namibia), Benjamin Mkapa (Tanzania), Abass Bonfoh (Togo) Gnassingbe Eyadema (Togo), Bakili Muluzi (Malawi), France-Albert Rene (Seychelles) and Abdiqassim Salad Hassan (Somalia).
2007-10-23T13:22:00+00:00October 23rd, 2007|General|