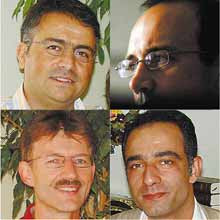 It is with great sadness that I have to ask you to keep my missionary friend, Martin de Lange (top right) in your prayers. 3 Missionary friends (which he led to the Lord and worked with very closely in Turkey) has been murdered a few days ago. Their throats have been cut after they have been stabbed several times with a knife.

Martin de Lange said this morning that the deaths of these missionaries are not just cruel but they have become our modern martars for Christ. Please think of their families today as they have also been threathened. In a country of 74 million people only 3 000 are Christians. Some of our friends continue to serve in Turkey. Please pray for Sydney and Naomi Moss who is still hiding in Turkey.

It is with deep regret that we request prayer for Turkish Christians following the murder yesterday (i.e. Wednesday 18th) of three Christians in Malatya, eastern Turkey. Five attackers entered the Zirve Christian publishing house in the early afternoon. They bound the three men present to chairs and then slit their throats.

Our three brothers were:
a. Necati Aydin, who leaves a wife and two small childrenb.
b. Ugur Yuksel, who was singlec. Tilmann Geske, a German national, who leaves a wife and three children aged between 8 and 13. He was 46 and has worked for a translation company in Malatya since 2002.
c. Necati and Ugur were both Turks in their mid-thirties and worked at the publishing house.
Ugur was buried this morning in Elazig, while Necati’s funeral is scheduled for Saturday in Izmir. Police came to the scene whilst the attackers were still present. Four were arrested. The fifth tried to escape by jumping from the fourth floor. He was taken to hospital with serious injuries. There had been threats against the publishing house in recent times. There has been widespread condemnation of the murders in the Turkish press.
Turkish Christians request our prayers that:
a. The two widows will know the comfort and presence of Jesus as they grieve
b. Likewise for their children
c. Likewise for the wider family of all three of our brothers
d. Christian leaders will know how best to support the three bereaved families
e. Christians across Turkey will wisely and courageously live out their faith in all aspects of daily life
f. The injured attacker will recover fully from his injuries
g. All involved or affected will hear the truth message of Jesus and respond to His loving call to them.