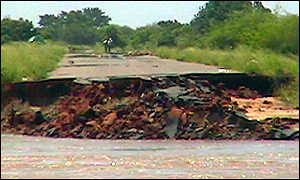 Saturday February 10, 2007 1:16 AM
By EMMANUEL CAMILLO
Associated Press Writer
MAPUTO, Mozambique (AP) – Water released through floodgates at a mighty dam in northern Mozambique is worsening floods that have already killed dozens of people and swept away hundreds of homes, the prime minister said Friday.
Torrential rains have unleashed devastating floods in southern Africa since January, submerging roads, damaging bridges and power lines and leaving hundreds of thousands homeless in Angola, Mozambique and Zambia.
In Angola, 71 people have drowned and 29 in Mozambique, officials said. The flooding has also aggravated a cholera outbreak.
Already raging waters in Zambezi River are expected to rise further with a large flood wave traveling down from the huge Cahora Bassa hydroelectric dam in northwest Mozambique.
On Wednesday, authorities trying to secure the dam doubled the discharge from its floodgates to nearly 350,000 cubic feet per second, even amid fears of the danger to people along river banks, said Prime Minister Luisa Diogo.
She said the lower Zambezi Valley is threatened by swollen tributaries of the Zambezi as well as the walls of water descending from the Cahora Bassa.
Diogo, who flew over the Zambezi River valley Wednesday, said only the rooftops of a few houses could be seen poking above floodwaters.
Military helicopters and civilian canoes have been rescuing trapped people. Riverside dwellers who ignored warnings to move to higher ground have survived by clinging to trees in northern Manica province, the daily Noticias newspaper reported, quoting a district administrator.
Mozambique, one of the world’s poorest countries, suffers from frequent flooding. In 2000 and 2001, floods killed more than 800 people, left hundreds of thousands homeless and severely damaged roads and bridges.
This year’s floods are not expected to claim as many lives because of disaster-management services set up after the last catastrophe, and early warning systems.
The U.N. World Food Program said Friday it would call for international help, estimating that 37,000 acres of crops have been lost in Mozambique and that up to 285,000 people will need food aid.